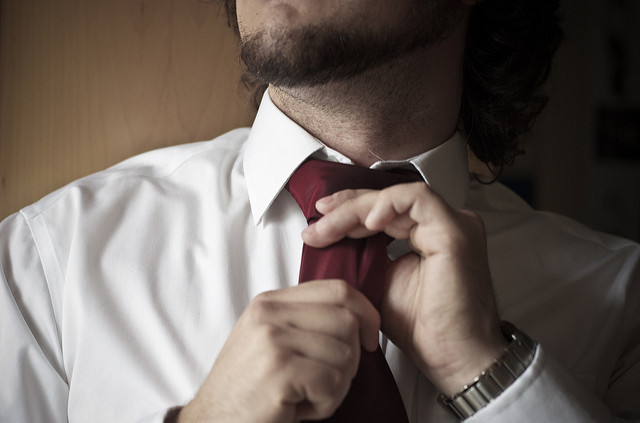 Lucy Kellaway, at the FT, is chronicling a trend towards formality in business, which she puts down firmly to the recession. In recent columns, she has detected a rejection of the casual both in how people dress and in how they write.

It is on the latter that she is more convincing, having carried out a comparative analysis of emails she has received from readers recently against others received nine years ago:

“The results prove beyond reasonable doubt that the pendulum has swung away from slouchy informality towards correct usage. In 2000, more than a quarter of e-mails were entirely written in lower case. In the recent batch only one e-mail shunned the capital letter, and that came not from a young techie but from a man who had worked on Wall Street in the 1960s. As his use of language was otherwise impeccable I am inclined to think that the reason for the absence of capitals was that the gentleman was having difficulty operating the shift key.

“In my earlier audit there was a rich variety in e-mail sign-offs, but almost all were ugly. One of the most common was “rgds”, a hateful little abbreviation, insulting in its implication that the writer is too busy to make three extra key strokes for the recipient’s benefit.

“Yet in the 2009 group there was only one “rgds”, and instead “Yours Sincerely”, even “Yours Faithfully” have made walloping comebacks.

“There has been a corresponding return to favour of the surname, which in 2000 was little in evidence. Nearly 40 per cent of the recent e-mails addressed me as “Ms Kellaway”, “Mrs Kellaway” or “Lucy Kellaway”, and before the name came my very favourite form of address, which is “Dear”. This is firmly back in fashion, while “Hi” and “Hey”, which were both in vogue in 2000, are on the way out.”

On the trend towards wearing suits, the evidence is rather more flimsy. She notes a few opinions that it is sensible to dress up to make a better impression in hard times and adds a few thoughts of her own along these lines. But the hardest data she can offer that there might be some kind of a trend is an anecdotal observation of a trade fair:

“At a conference in London last week for HR managers, everyone was in a suit and tie while, at the same conference two years ago, they were all casual. HR people are on the front line of the jobs market and they are also like lemmings – so, if they think suits are in, they are in.”

My email and SMS inboxes bear out a shift towards greater formality and correct grammar in written communication. But I don’t see a decisive return to the suit and tie culture. And nor would I expect to.

For one thing, the economic crisis began in the City where the trend towards casual dressing at work never really took hold. The fact that the enterprise of banking has been shown to be all superficial appearance with no substance might suggest that some people at least would hesitate to emulate its sartorial code.

For another thing, the wave of redundancies gives many people the impetus to strike out on their own and start their own businesses. For some of these, at least, part of the attraction is to be one’s own boss, be true to oneself and please oneself how to dress. Casual attire might signal someone who is facing the crisis with independence and groundedness. In certain circumstances, this may be more impressive than donning traditional office wear.

The suit and tie might make sense for some, but it is by no means the obvious or most rational stance in turbulent times. It is not surprising then that the evidence for a trend to formality in clothing is thin.

So it is interesting that the emerging formality in how people write seems to be a more robust shift. From one perspective, this can be seen as a hard-nosed attempt to differentiate oneself in a challenging economy. That Lucy Kellaway reports that sophisticated punctuation is back in fashion would imply that in some measure at least people are trying to demonstrate their cultivation.

But she is also right to suggest that the casualness of discourse which became familiar to us over the past decade in text-speak and emails somehow suggested a lack of respect for the recipient. By using honorifics, the “Dear” form of address and signing off “Yours sincerely” or “Best wishes”, people are now adopting a gentler approach to one another and signalling their own desire for respect.

Either way, the re-emergence of formality in language points to a careful, more orderly and more thoughtful world – one in which it is not sensible to give the impression that you are somehow above communicating in anything other than brutal and abbreviated language. This makes sense whether or not you are attracted to formality in clothing. Language conveys more powerfully than clothes the value of respect and the breadth of one’s intelligence. How you choose to dress is still in large measure contingent on how you see your destiny. How you address others is less negotiable in the current climate.