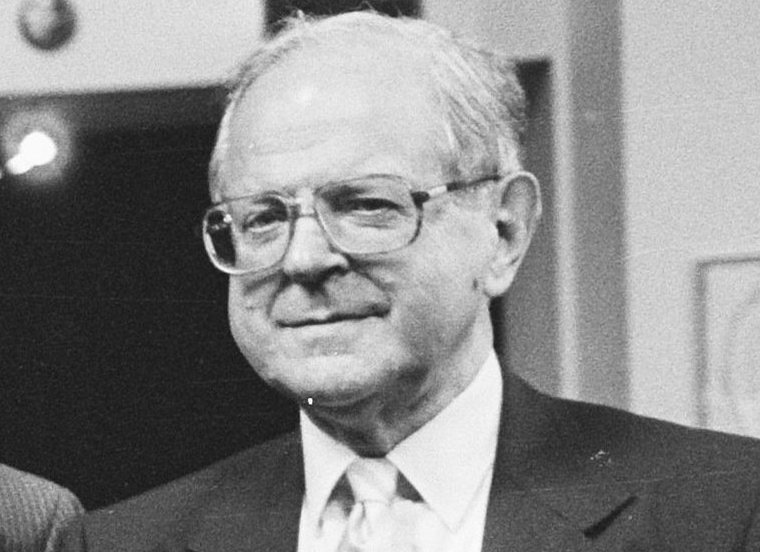 However my endeavours to track down the quote would only ever turn up secondary sources, most notably this short piece posted in 2003 by John Derbyshire:

Several readers have asked me for Robert Conquest’s Three Laws of politics. As best I can remember, they are: 1. Everyone is conservative about what he knows best. 2. Any organization not explicitly and constitutionally right-wing will sooner or later become left-wing. 3. The behavior of any bureaucratic organization can best be understood by assuming that it is controlled by a secret cabal of its enemies.

The problem with this is that the second of these three laws appears to come not from Robert Conquest but John O’Sullivan, a former advisor to Margaret Thatcher. This casts doubt on the accuracy of the whole idea of Conquest’s three laws. Eventually, I turned to Twitter for assistance and was enlightened by Mary Elwin. She found an earlier version of the aphorism attributed to Conquest by both Kingsley Amis and Andrew Brown. This is Andrew Brown, writing in The Guardianin 2003:

In the 1960s, Conquest was a founder and attender of the weekly “fascist lunches” at Bertorelli’s in Covent Garden, arranged by Amis. In the 1970s, he added attendance at “un-fascist lunches” on Fridays, with Martin Amis, the illustrator Mark Boxer, and Christopher Hitchens. “He’s not a very feral reactionary,” says Hitchens, who believes Conquest was a much more serious communist than he lets on. Conquest and the elder Amis campaigned against the expansion of university education, on the grounds that it would dilute standards. “More will mean worse” was their slogan and neither ever saw anything to make them retract that judgment. From this period dates “Conquest’s Law”, which states that “Everyone is a reactionary about subjects he understands”. This was later supplemented with the balancing rule that every organisation behaves as if it is run by secret agents of its opponents.

And here is the source from the memoirs of Kingsley Amis, that Mary posted (now deleted) on Twitter:

These are reliable and consistent sources for Conquest’s “laws of politics” of which there were only two, not three. It seems the laws did not appear in any book written by Conquest but was a rule of thumb he would offer in conversation. And the second law – which inspired the apocryphal third (try to keep up) – turns out pleasingly to be more widely applicable than to bureaucracies: “Every organisation behaves as if it is run by secret agents of its opponents.”

What makes this paradox so insightful? I take it to mean that any organisation that survives long enough ends up being run in such a way as to contradict its founding purpose. As an organisation grows and becomes more complex, it ends up acting primarily to ensure its own perpetuation. The purpose for which it was founded becomes secondary to its own survival. In fact, for many in the organisation, possibly the vast majority, its continued survival becomes confused with the purpose it was originally founded to deliver. This can lead to behaviours that seem rational when viewed from the perspective of perpetuating the organisation but look counter-intuitive when considered from the perspective of what the organisation ostensibly exists to do.

So although the organisation may not literally be run by secret agents of its opponents, it might as well be. This is an idea that is remarkably resonant with our age. More to follow in a subsequent post.