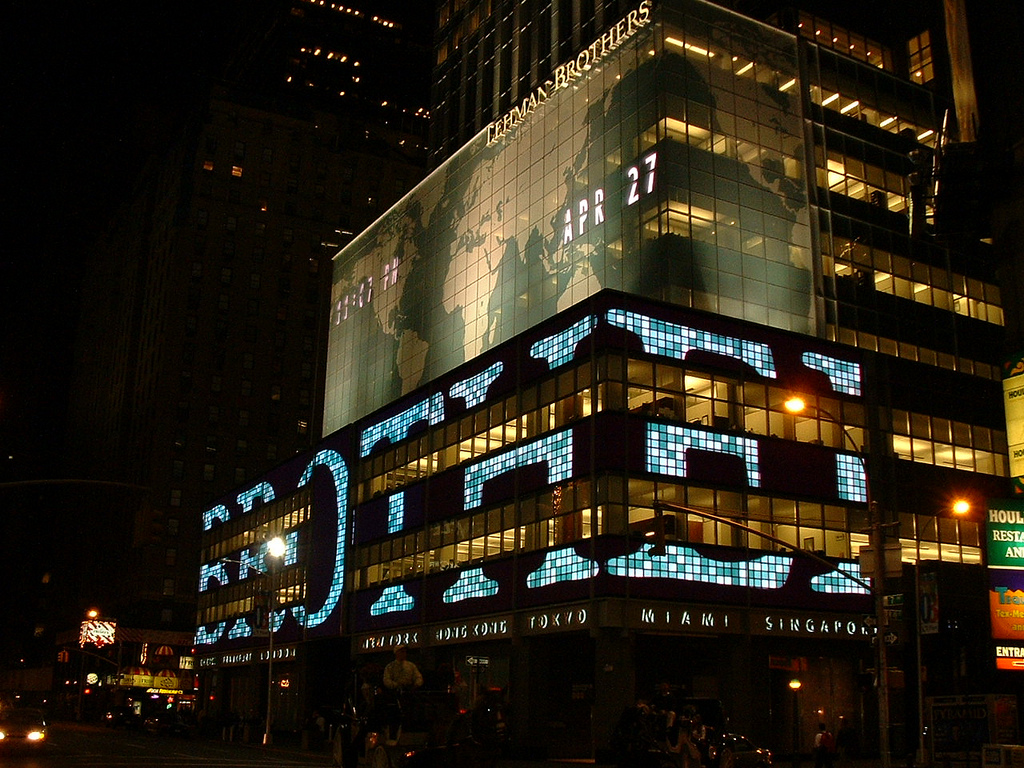 The company’s founding is bound up with the slave-based cotton economy of the mid-19th Century. Hayum Lehmann arrives at New York from Germany and has already been transformed by the six-week journey: having learned to gamble and taken the measure of his fellow travellers from all over Europe. As if to underline the reinvention, he’s given a new name – Henry Lehman – by an immigration official and heads to Alabama where he opens a store selling fabric and clothes to the plantations. He is soon joined by his brothers, Emanuel and Mayer, and the business booms as they progress from selling cotton goods to brokering raw cotton to the industrialists of the north. If a business is informed through the years by its founding purpose, Lehman Brothers was not to be defined by its initial roots in retail. From the outset, it evolved as a shape-shifting vehicle for turning a profit: creating as much as responding to the twists and turns of American capitalism.

Not a great deal is made in the play of the context of slavery. This is jarring to modern sensibilities. But the story is narrated by the characters as they perceived it at the time. The slave economy was a given and, as the play presents them, the brothers slotted into it without much reflection. The journalist, David Goodhart – who is descended from Mayer Lehman – suggests this is a realistic portrayal (£):

The Lehman brothers … were welcomed in Alabama, where white Europeans were heavily outnumbered by African slaves. They repaid this welcome by becoming Confederate patriots during and after the Civil War. And as the shopkeepers prospered and grew into successful cotton brokers they also became household slave owners. Questioning slavery, as Roland Flade, historian of the Lehmans, points out, was not an option if they wanted to be accepted in Alabama. He also observes that they were evidently decent enough masters, as two of Mayer’s seven slaves moved north to New York with the family after liberation. Nevertheless the Lehman history is a useful reminder that people who are oppressed in one context can become oppressors in another.

In Alabama, the Lehmans are observant Jews. They sit shiva for a week when Henry dies in Alabama. By the time Emanuel dies, the firm is a major bank in New York and only three days of mourning are observed. When his son, Bobbie – the last Lehman on the board – passes in the 1960s, the bank stops for just three minutes. In this relaxing of orthodoxy, there is a symbol of the company’s loosening of its business values. The founders’ ethos of hard work and enterprise-building is consolidated by the second generation. The legacy must be protected – although, by now, there is a clear understanding that the business is less about trading commodities for money than about trading money as a commodity. While the religious orthodoxy may have eased, there remains a close attachment to the family’s Jewish culture. And this, it turns out, is pivotal to its commercial success. Lehmans was a risk-taking bank which provided seedcorn capital for the launch of great industries, such as the railways and Hollywood. As David Goodhart explains, this was the opportunity for the Jewish finance houses (Goldman being another):

Established banks such as JP Morgan tended to finance the big ‘robber baron’ companies in the late 19th century and it was left to the outsiders to back the riskier upstart companies. ‘Let the Jews have that one,’ is said to have been a common cry on Wall Street.

The bank survives the Wall Street crash by managing to avoid being one of the early sacrificial lambs allowed to fail prior to the federal government stepping in to refinance the industry. For the third generation, the legacy is enjoyed more than protected. Bobbie Lehman seems disconnected from his Jewish heritage and – although he is pivotal to guiding the bank through the post-crash years – he is portrayed as initially more interested in art and racehorses than in his stewardship of the firm. Under his watch, the family eventually loses control and Lehmans begins the shift toward speculative trading of financial instruments that sets it on the path to becoming the sacrificial lamb in 2008.

Through each evolution, there is the impression of the strategy and operations of the business outpacing the understanding of the older generation as they become figureheads in the boardroom. In its portrayal of a family business losing its way, the play reminded me of a visit to the museum of the Marks & Spencer archive in Leeds. There, too, the story is told (perhaps unintentionally, since the museum is operated by M&S) of the fading of a business, once driven by creative enterprise and social purpose to shape the sensibilities of a nation, but whose relevance diminished as the founding families withdrew and PLC status beckoned.

Throughout the play, both ends of the Lehman story are present. It plays out on the set of Lehman’s abandoned 21st Century office, as the cast deploy as props the cardboard boxes that redundant workers used to take home their possessions. But they are dressed throughout in the frock coats of the Victorian founders. It’s a moving production, and this derives in part from the fact that all the parts are played by just three actors: Simon Russell Beale, Ben Miles and Adam Godley. Their versatility evokes empathy for all the characters, none of whom is entirely good or bad. They capture the excitement and chutzpah of the building of a great enterprise which funded the creation of so many more. The whole thing ends with the ringing of a telephone signalling the bankruptcy of the bank. What a waste.