He discusses how numerous disciplines are converging around a developmental perspective and sets out an agenda to apply this to organisations. He shows how each stage of human development generates a typical organisational form. Modern organisations tend to be based on either a conformist paradigm (for example, public sector bureaucracies) or an achievement one (banks or technology corporations), both rooted in rationality, structure and suspicious of spirituality. A newer pluralistic form (think Ben & Jerry’s) recognises a need for human empowerment and attention to values but still clings to hierarchical forms. Laloux identifies a form that goes beyond this, to organise around self-management and nurturing human potential without the need for ego-based controls.

His analysis resonates with our perspective. Laloux refers to leaders dealing gracefully with adversity. He describes organisations that value the wisdom that can be found beyond, but not at the expense of, rationality – tapping into all domains of knowing, emotional as well as analytical.

The core of the book is a detailed description of the organisations. It is an invigorating read since it demonstrates with example over telling example how organisations can thrive while swimming against the tide of instrumentalist, shareholder-value-driven bureaucracy. He provides exhaustive detail on the structures, practices and processes the organisations adopt so as all the time to put themselves, whenever there’s a choice to be made, on the side of human growth and emancipation. Employees are encouraged to find their own roles and play to their strengths. Decisions are taken by peer groups rather than by leaders, or often by individuals acting simply on advice from relevant colleagues, with the consequence that corporate centres are largely redundant. Employees are trusted rather than controlled to do the right thing, so that cumbersome compliance practices are no longer needed. Throughout the book, the costs of the old ways of doing things are revealed. Many of the organisations described found their own organisational model, but it’s striking that the practices are common across the group.

An inspiring example is that of Buurtzorg, an organisation of Dutch community nurses, that established a patient-focussed approached to care. This has has swept aside the time-and-motion based approaches of incumbents, which tied nurses to administering practices rather than treating patients as humans. While nurses are able to spend considerably more time with patients, and to pursue their vocation of care, their efficiency is greater as patients recover more quickly and are helped to care for themselves. 60 per cent of Dutch community nurses switched to Buurtzorg in about six years.

Laloux shows how the self-managing approach works in diverse contexts – including solidly blue collar environments, such as FAVI, a European car components business, which has weathered the onslaught of cheaper Chinese competition and the economic recession. He finds that the organisations in the new paradigm are attentive to matters of purpose and culture but not at the expense of thinking through what kinds of behaviours and systems are needed to sustain them. Contrast this with bureaucratic organisations which focus on behaviours and systems at the expense of the soft stuff, or more cuddly organisations which seek to create empowering cultures without realising that their traditional systems of control and hierarchy militate against these.

Why do these organisations offer a paradigm of the future? Because they represent a sustainable model by which organisations can align their corporate interest with those of their employees, customers and society as a whole. They show that when an organisation pays attention to its purpose in the world, individuals are able to realise their own sense of purpose more easily. They cease to be automatons within a corporate machine, giving their time for money. Instead, they can exercise initiative, connect with how their heart drives them, lead more fulfilling lives at work and create products and services which enrich their customers. FAVI, for example continually delights its clients in the motor industry by going the extra mile to fulfil contracts. Everyone is bound together in common purpose:

“The organisation is viewed as an energy field, emerging potential, a form of life that transcends is stakeholders, pursuing its own unique evolutionary purpose. In that paradigm, we don’t ‘run’ the organisation, not even if we are the founder or legal owner. Instead, we are stewards of the organisation; we are the vehicle that listens in to the organisation’s deep creative potential to help it do its work in the world.”?

Laloux lists the cultural assumptions that are at play in his pioneer organisations. Here’s a selective list of some which seem very reasonable yet would be deeply challenging to conventional organisational cultures:

I take issue with Laloux when he suggests that traditional organisational cultures simply reflect the assumptions and values of founders or leaders. A culture always comprises the assumptions and values of all its members. The leaders try to influence the culture but these efforts usually invoke acts of cultural resistance. Workplace culture becomes dysfunctional where the system sets up interest groups in entrenched opposition to each other. I think this is endemic to most instrumental organisational systems. Laloux’s pioneer organisations, by putting purpose at the heart of what they do, seem to work hard at creating harmonious systems which support the purpose and mediate conflict in emotionally mature ways.

Reinventing Organizations is only the second heart-warming business book that I have read (this is the other). But Laloux is not glib about the prospects for more organisations developing along the lines that he documents. He identifies two necessary conditions:

I found this conclusion challenging to my perspective as a coach and consultant whose work focusses on integrating more emancipatory values into workplaces. Laloux’s analysis suggests that such efforts are destined to failure, absent a holistic approach to sustaining a purpose-driven approach in organisations. He’s deeply dismissive of those coaches who advocate attention to values and human development on the grounds that such attention will deliver a good return:

“I’ve never seen it work – the leaders listen with interest until they understand what practices are involved and how much control they would have to relinquish.”

I have experienced this yet I’m less pessimistic than he is. Perhaps because I view culture differently from Laloux, I see how pockets of good practice can influence practice elsewhere and gradually influence an organisation. But I agree that, ultimately, attention to creating a harmonious system is the only route to sustaining a collaborative model. And, as Laloux documents in his book, even this can be subverted by a change in leadership.

This book is a must-read for anyone interested in how businesses can play a more constructive role. It does not provide a simple path to a new model, but brings to life the conviction, that is increasingly widely held, that a new paradigm is both necessary and taking shape. 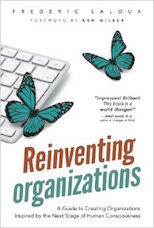 Reinventing Organizations, by Frederic Laloux. Available from the author.