The unharmonious sound of an establishment closing ranks could be heard last week when an NHS hospital attempted to discredit the account by the MP, Anne Clwyd, of the death of her husband while in its care. While conceding that Ms Clwyd’s husband, Owen Roberts, died of hospital-acquired pneumonia, the University Hospital of Wales said it had no evidence to support Ms Clwyd’s assertion that Mr Roberts had died “like a battery hen.”

Cardiff and Vale University Health Board released a summary of an independent inquiry into Ms Clwyd’s allegations but declined to release the full report. So it’s impossible to assess what evidence it evaluated before reaching a view that Mr Roberts didn’t die like a battery hen.

If you think about it for a moment, though, it’s hard to imagine what would constitute sufficient evidence. Approached as a matter of fact, it is self-evident that Ms Clwyd’s claim could not be supported by evidence. An NHS hospital and a battery hen farm are different, incomparable things. You can see what University Hospital of Wales looks like in the picture above. A battery hen farm looks like this: 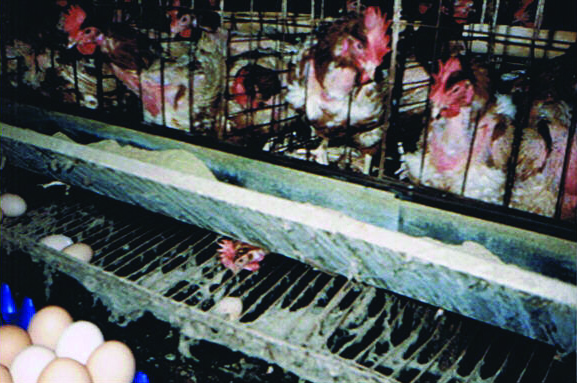 But Ms Clwyd wasn’t describing the circumstances of her husband’s death literally and it would be obtuse for any independent investigation to treat her complaint as if she were. She was using a powerful and emotionally resonant metaphor to convey her perception of the degrading conditions in which her husband needlessly died. Instead of enquiring into the truth behind her account, the hospital appears – absent the full report of its inquiry – to have tried to negate it by means of simpleminded and legalistic literalism. If this was its aim, it would appear to have succeeded insofar as the news coverage of its version of events was framed around the hospital’s dismissal of Ms Clwyd’s imagery, while its admission that it contributed to Mr Robert’s death was buried in the detail.

To the Sunday Times columnist, Camilla Cavendish, this all reeked of a cover-up (£):

“What kind of organisation uses such language to rebuff a grieving widow? What land of doublespeak are we in here? The published report is only a summary of an internal one. But the bald rejection of Clwyd’s claims, line by line, can be read only one way. It is an attempt to imply that this brave woman, who was the first MP to highlight the plight of the Kurds, who campaigned successfully to ban female circumcision, who served on the NHS royal commission, decided for some unfathomable reason to lie about the treatment of the man she loved.

“The report reads like a parody of legalistic paranoia. It is probably impossible to prove conclusively whether, for example, nurses “ignored” Clwyd and her husband. What managers should care about is that this is how she felt — and they should ask themselves why. All organisations make mistakes. The best, including NHS hospital trusts, acknowledge problems and take action. The worst try to smear their critics and cover up.”

To answer Camilla Cavendish’s question, the kind of organisation that uses such language to rebuff a grieving widow is one in which expert and egotistical power holds sway against the interests it is intended to serve. Egotistical power does not value the contribution of its users nor repsect their opinion, however well informed. The blogger Sally Donovan – whose writing demonstrates that she is brutally familiar with egotistical condescension in the health services – has helpfully defined the institutional drivers of care that all too often is both “severely lacking and delivered with conscious cruelty”:

It is never easy to listen to criticism of oneself. But organisations frequently default to a defensive lockdown against attack in the apparent belief that this will protect their reputations. In fact, it does the opposite as they reveal themselves to be incapable of learning from their errors and insensitive to human considerations. The aviation industry realised this decades ago, and now routinely treats failures with open enquiry, in order that the whole industry may learn relevant lessons and avoid future catastrophes.

Hospitals and care institutions need to apply the same approach and treat complaints such as Anne Clwyd’s as opportunities to learn and improve. This is what distinguishes a self-serving institution from one that genuinely serves the public.